Day 2 in Detroit was a huge success in our planned and unplanned activities.

We woke up early after a super-late and totally magical night at Soul Skate to catch a beautiful and somewhat heavy set from Heathered Pearls on the Beatport stage.  Heathered Pearls is the project of Jakub Alexander – he’s on ghostly international and lives in Brooklyn so we share some Ann Arbor–>NYC background.  After his set we got to talk about his musical aesthetic and the INTERVIEW will be posted this weekend.

Sunday was apparently the day for the REAL DJs to come out and work the turntables because DJ Psycho and Andres were both absolutely unreal on the cuts and beat juggling.  Psycho played a 100% vinyl set on three turntables that incorporated 80s 90s and Detroit classics with marvelous effect. He didn’t use the mic – simply used his facial expressions and knowledge of music to pump up the audience.  He was one of the only dudes I saw at the festival REALLY blending records (other than Skream but that’s a story for day 3).  How about I got interviews with BOTH of these cats and they will be up soon – also.   The third DJ after my own heart on Sunday was Nightwave.  I had no idea who she before the festival but chilling in VIP I heard some big joints with vocals and vocals are not always the easiest thing to find at Movement so I went down and listened for a while. She was REALLY going in. It took a while for Amp Fiddler to get set up so she got to run a few extra joints and one of them was UGKs International Players Anthem (WITH THE LONG ASS INTRO). I was impressed. 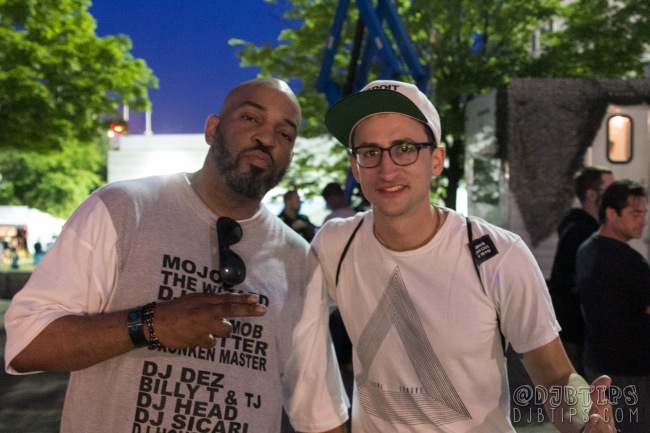 HIT THE JUMP FOR SETH TROXLER MARTINEZ BROS BAAUER AND RICHIE HAWTIN STORIES!
Go and see ALL THE PICS on Crocmode Facebook! (AND HIT LIKE DUH)

Seth Troxler and the Martinez brothers are two (or three) of NYC’s hottest producer-DJs.  Seeing them back to back was almost too good to be true.  I bumped into him in VIP after his set and snapped this pic:

The night ended with Baauer and Richie Hawtin.  Baauer had a really bizarre lighting situation and i was unable to get any good shots, also my experience was basically of a producer who had put together a DJ set rather than a true DJ really shining.  Just Blaze rocked on day 1 and played all the same big room Trap and Twerk joints but mixed them in with a ton of skill so there were some big shoes to fill!