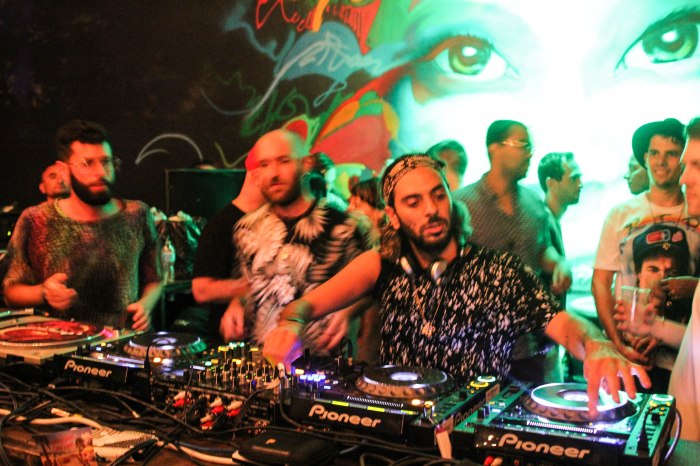 Miami Music Week is a great excuse to explore my boundaries as a med student and take some pictures and meet some people.  This week I met Nick Catchdubs, Craze, Vanessa from Posso, A-Trak, Jubilee, and Spankrock.

The secret to my success in getting into many shows was following around one of my favorite DJs and producers Sammy Bananas.  This guy is one of the humblest – most interesting – coolest dudes in the game.  He also has an incredible ear for funky house and makes some of the best edits – he really gets house music in a way that is very rare.  He dropped this new track he’s apparently working on with Apt One (Philladelphyinz – Young Robots) that uses the herb alpert rise sample (biggie hypnotize for the uninitiated) and I’m really looking forward to that release.  He had a great room to play to at Blackbird Ordinary in Brickel and I ran into some friends of one of my med school friends and they were really cool! Such a highlight of the night – music fans – people that like to dance – and mutual acquaintances. They bounced to catch the train and Sammy and I dipped to Grand Central to catch A-Trak’s set at 1AM at the Fool’s Gold party.

At this point my flash had died and I was also wearing a super goofy suit – and dude didn’t let me on stage so I didn’t get any good pictures of A-Trak.  Did however get to meet him after his set. Have to say the Fool’s Gold boss blew me away last night at Grand Central. He plays so heavy and it’s very current.  Makes sense with what he’s been doing with the label merging the worlds of dance music and hip hop and kind of looking past genres to the future.  We talked about Danny Brown. He was super humble and eventually I ran out of questions I’m like “How do you feel?” He’s like “It feels great man we’re making music and going places – sorry I have to change my shirt” and spins around to take it off.

Talked with Vanessa from Posso for a while. She’s from LA and her musical project is really cool  – she can actually sing really well although it seems like their show is mostly DJing for now.  Asked her how she stays energized on the road and she said she doesn’t drink alcohol – makes sense.  Also she likes cooking for people and makes a lot of the outfits they wear which is cool.  Looking forward to seeing them next time they’re in Miami in April.

After catching the end of Martin Solveig and A-Trak and drinking some free beers we bounced to catch Crew Love in Wynwood.  This party was really amazing.  Reminded me of the poplar grove that is no more in Gowanus where I danced last summer with the Mister Sunday crew.  I took some shots and gave away some stickers and danced and eventually materialized back in Deerfield Beach. Amen.

SEE ALL THE PICTURES ON CROCMODE FB

Posted on March 28, 2015 by Isaac Goldszer in Uncategorized